Hog Rush
Bormin is a character in Mutant Year Zero: Road to Eden. His default weapon is the Gaper. Increasing his stats increases the amount of damage Bormin can take before bleeding out. He and Dux are assigned the task of finding the missing Gearhead Hammon. They are the initial playable characters in the game. After the end of Seed of evil DLC, Bormin chosen as the new elder of the ark replacing Ingmar Edison. 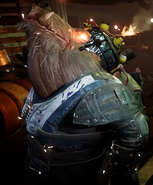 Bormin as Experiment in eden

Bormin and Dux saved by The Elder

Bormin and Dux on Seed of Evil DLC
Community content is available under CC-BY-SA unless otherwise noted.
Advertisement