watch 02:24
'Mutant Year Zero: Road to Eden' – Cinematic Reveal Trailer
Do you like this video?

RP
Mutant Year Zero: Road to Eden is a tactical adventure game developed by the The Bearded Ladies and published by Funcom.

It released simultaneously on PC, PS4 and Xbox One on December 4, 2018. It released in retail and for the Nintendo Switch digitally and physically on July 30, 2019. The retail edition is distributed together with Maximum Games.[1]

"From a team including former designers of HITMAN and PAYDAY comes Mutant Year Zero: Road to Eden, a tactical adventure game that combines the turn-based combat of XCOM with real-time stealth and exploration of a post-human world reclaimed by nature… and Mutants.

Of course the world ends.

It was just a question of time. Extreme climate change, global economic crisis, a lethal pandemic, and increasing tension between old and new superpowers. For the first time since 1945 nuclear weapons were used in armed conflict. Mushroom clouds rose from east to west before the dust settled.

Now it's over and the Earth is still. Nature has invaded ruined cities. Wind sweeps through empty streets, turned into graveyards.

The humans are all gone. Scavenging through the remains of civilization are the Mutants, deformed humanoids and animals alike, searching for salvation or just something to eat. To survive, you and your companions must venture out to explore the Zone.

Maybe one day you will find the Eden of legends, the ancients' haven in the middle of hell. That's where truth awaits, the stories say. Maybe you will find your answers there.

Then again, maybe it's all bullshit."

Tactical combat: Mutant Year Zero: Road to Eden is the ultimate fix for your tactical strategy addiction. Dive into a deep, turn-based, tactical combat system inspired by the XCOM games.
Explore a post-human Earth: Journey through a post-human world of abandoned cities, crumbling highways, and overgrown countryside. Check back at the Ark, a neon-bathed oasis of ill repute and questionable characters, to restock your supplies and plan out your next adventure.
Control a team of mutants: A duck with an attitude problem and a boar with anger issues; these aren't your typical heroes. Get to know Dux, Bormin, Selma, and many other characters each with their own unique personality and deranged perspective on the world and their situation.
Master the stealthy approach: Sneak through shadows to avoid conflict or to catch enemies unaware. Real-time stealth allows you full control of approach: sneak into an enemy camp, position the team of Mutants to your advantage, and gain the element of surprise.
Unlock Mutations: Unlock new mutations and abilities for your Mutants, such as Selma's Stoneskin, Bormin's Charge, and Dux' uncanny ability to sneak into a camp full of enemies unnoticed, despite being a 4-foot tall walking, talking duck with a crossbow.
Dynamic environment: Use the environment to your advantage. Stay out of floodlights, hide from line of sight, or just blast down fully destructible walls and buildings and wreak utter havoc.
Loot, loot everywhere: From makeshift slingshots to high-powered rifles and top hats to police vests, make sure you equip your Mutants for the dangers ahead. Nothing says post-human quite like a mutated boar in spiked metal armor charging at you with a blunderbuss in his hands.

The game can be played in real-time and in turn-based. How a player chooses to proceed can depend on the situation. Walking and stealthing to and inside a camp could be a good time to use real-time and simply have the non-played characters following the controlled one. Getting into combat with multiple enemies would be the time to use turn-based strategies instead.  The combat takes place in a square grid pattern with each character able to move in any obstacle-free direction (front, back, left, right). The grid will show where the character can move and how far for that turn. The chance to hit is based on percentages. Any action taken during a turn will use Action Points.

Actions by fellow combatants can also damage members of their own teams. For example, an enemy can throw a Molotov, damaging their target, but also any other non-playable character in it's path, or themselves, if they are carrying one and get knocked down. Playable characters can also damage their own squad in similar ways - for example, blowing up a robot too closely to a fellow team member.

Each character has specialized weapons they can use. Some weapons make more noise than others, such as the Gaper, and can alert nearby enemies if used. Players should keep this in mind in situations where stealth is utilized.

Each character has a three sets of mutated abilities they can choose from - major, minor, and passive. One ability from each group can be active at any given time, and can be changed as long as the characters is not locked into combat. Each mutation is designed to be better or worse against certain types of enemies, so players should evaluate their choices before engaging in combat.

Years ago disease sprang up in a city not too far from where the Ark is now. The victims' eyes would glow red and they would bleed from their ears. This disease became known as the Red Plague. Within forty years, most of the human race had died. Some cited it as nature's revenge against the greed, arrogance, and egos of humans who thought themselves gods. Gods who were later named The Ancients. The ghouls in the Zone even worship the Ancients.

A few humans took refuge and created the Ark, a safe haven for those in need of help, but willing to work for it. The Ark is lead by one known as The Elder. It was the Elder who found the part-human, part-animal Mutants in the Zone and brought them back to the Ark. The Elder fed them, clothed them, and trained them as Stalkers. It is the Stalkers who scour the Zone looking for metal scrap to bring back. This resource is used by the skilled residences of the Ark to create items needed to help the inhabitants survive. The Zone is a dangerous place, the the Stalkers are trained as warriors, hunters, and assassins.

Outside of the Ark is a faction known as Nova Sect, led by Plutonia. Anyone who refuses to follow her rule, are killed. Those, like the Mutants, who have lived in the Zone for a period of time, have developed special abilities that can be used in combat, or in manipulative ways.

Hammon, the Ark's lead Gearhead, has gone missing after taking an expedition out to the north. He was investigating the crash of aircraft from space that he believed was sent from a place he and a few others call 'Eden'. For most, Eden is just a fairy tale mutants and humans tell themselves to sleep better at night, but their stories describe Eden as a safe euphoric haven.

The Elder sends Dux and Bormin out to the Zone to find out what has become of Hammon. They learn he has traveled north, past the Zone, into areas they have never been in before. The Zone was bad enough, but what lies beyond could be even worse. Knowing how badly the Ark needs Hammon, the two do as they are asked. Along the journey, they find others like themselves.

Mutant Year Zero: Road to Eden is based on the the Mutant: Year Zero property currently owned by The Cabinet Group, which in itself, was based on the older tabletop franchise known as Mutant, created and published by Target Games, a Sweden-based company. In each of the original Mutant games, the setting takes place in a post-apocalyptic world, created by a catastrophe that resulted in the combined mutations of human and animals known as anthropomorphism. These creatures developed unique abilities. This hard-to-thrive world also resulted in a rise of robotic creations. This world was carried over to Mutant Year Zero: Road to Eden.

This is paid content for the game which is exclusive to the DLC. It includes

The Deluxe Edition includes the full game and the Seed of Evil DLC. (PC)

"Ever since we started working on this game, we have always felt it would be a perfect fit for the Nintendo Switch, the game lends itself really well to the Switch controls and the pacing of the tactical turn-based combat is perfect for an on-the-go, handheld console. We are also excited for the opportunity to tell another Mutant Year Zero Story with the new expansion DLC, and we look forward to talking more about that soon." ― Haraldur Thormundsson, CEO of The Bearded Ladies.

Add a photo to this gallery 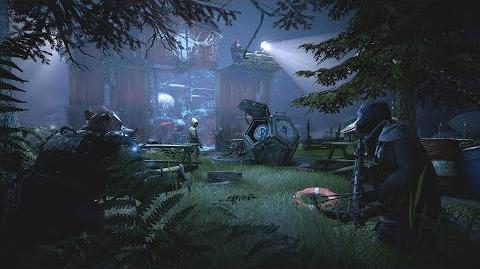 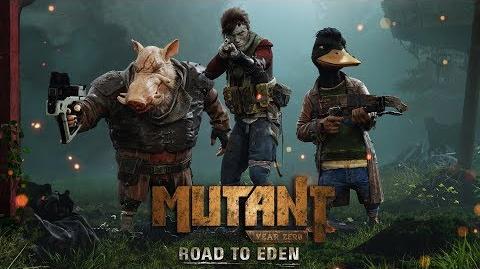 Retrieved from "https://mutantyearzero.fandom.com/wiki/Mutant_Year_Zero:_Road_to_Eden?oldid=1494"
Community content is available under CC-BY-SA unless otherwise noted.